cancel confirm NSFW Votes: (0 votes)
Are you the publisher? Claim or contact us about this channel.
0
Showing article 184 of 562 in channel 31949556
Channel Details:
Viewing all articles
Browse latest Browse all 562
0
0 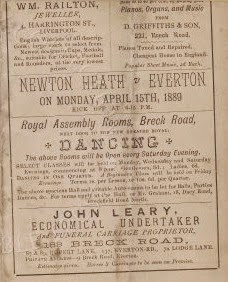 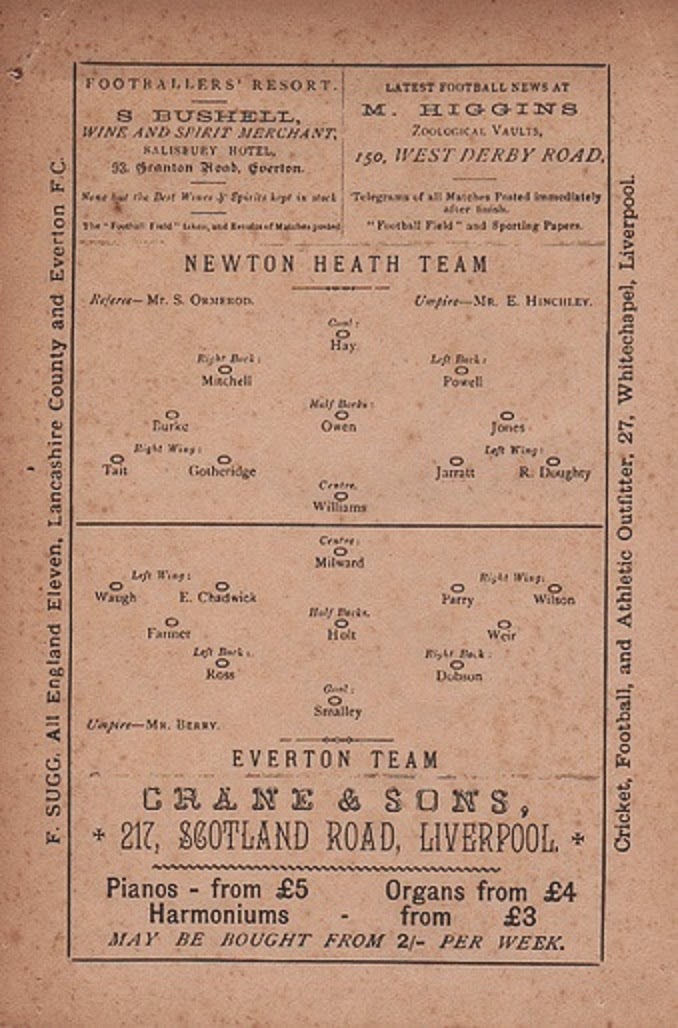 As the 1888-89 season drew to a close the press reveals that clubs were engaged in an intense schedule of friendlies. The programme above is from Newton Heath's first ever visit to Anfield.
Everton had finished in 8th place in the Football League , Newton Heath had topped the Combination.
Note that the Everton line up was not as advertised, with the following changes made:
J Angus (Waugh)
W Brown (Chadwick)
R Watson (Parry)
W Briscoe (Wilson)
W Wilson (Weir)


These two well known teams appeared at Anfield last evening it being the first appearance of Newton Heath on the ground. The visitors brought a good team with them and Everton were presented by two or three of their second team. About 3,500 spectators assembled. Williams kicked off, and Everton at once pressed. Farmer and Ross punted into goal-Briscoe sent over to Watson and he parted judiciously to Angus, who scored with a splendid oblique shot, four minutes from the start. Good play by Farmer kept Powell busy, but at length Dobson was beaten by Gotheridge. Ross cleared but Brown put the ball though when he had a good opportunity to pass. The play was kept on the Everton right, which was not to the best advantage. From a foul the ball was taken over the Everton lines for the first time. Parry passing by the whole of the home forwards took the ball down,, and Angus obtained a foul, which Farmer put over the bar. Williams and Jarrett rushed away, but Smalley cleared. Watson was fouled when clear away, but the referee gave a foul. Excellent play by Holt gave Watson and Briscoe possession, they passing to Milward and he shot into Hay's hands, who only partially cleared and Briscoe shot through. Good combined play on the part of the home forwards kept the sphere in the opponents goal, Milward at last give Hays a handful, which he had no difficulty in clearing. A good shot by Owen was diverted by Williams who headed out. Everton then secured a foul near goal, and Watson shot through, but as the ball was wrongly placed it was brought back. Williams started, and Tait and Williams ran down. Williams shot to Smalley's hands, and from some inexplicable cause he allowed the ball to fall and scored for the visitors. Back play by Dobson gave Jarratt a possible chance, but Ross came to the rescue. Hays next had a busy time, as he had to fist out five consecutive shots. Doughty and Gotheridge worked their way down, but found Ross good enough for them, and Angus gave to Brown, who raced away, but nothing came of it. This was directly afterwards followed by a foul in goal and Ross scored the third point for Everton. The home team still maintained the pressure but breaks away by Tait and Gotheridge relieved the monotony. Ross gave a foul in goal, but Holt sent up the field, and Watson forced the pace considerably, and the home forwards again became the aggressive. Score Everton 3 goals; Newton Heath 1 goal, Teams Newton Heath:- Hays (T), goal, Mitchell and Powell, backs Burke, Owen, and Jones, half-backs, Tait, Jarrett, Williams, Doughty, and Gotheridge, forwards. Everton:- Smalley, goal, Dobson, and Ross (captain), Weir, Holt, and Farmer, half-backs, Briscoe, Watson, Milward, Angus, and Brown, forwards.
The Liverpool Mercury  16.04.89
Viewing all articles
Browse latest Browse all 562
More Pages to Explore .....