cancel confirm NSFW Votes: (0 votes)
Are you the publisher? Claim or contact us about this channel.
0
Showing article 200 of 562 in channel 31949556
Channel Details:
Viewing all articles
Browse latest Browse all 562
0
0
The Laws of the Game
Shortly after the Football Association formulated The Laws of the Game in 1863 they were published by John Lillywhite of Seymour Street in a booklet that cost a shilling and sixpence. 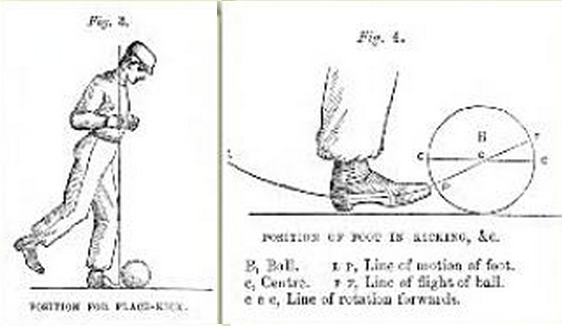 Kicking the ball- simply explained with the aid of annotated diagrams(!)
Beeton's Football
In 1866 cricket writer Frederick Wood produced Beeton's Football. The Beeton's series covered a wide range of subjects, and was an offshoot of the legendary Beeton's Book of Household Management.
The book contained hints on diet and preparation (avoid foods and habits which are injurious to the wind and general powers of endurance), and illustrated guidance on how to best kick the ball.
the 98 page octavo book cost a shilling . 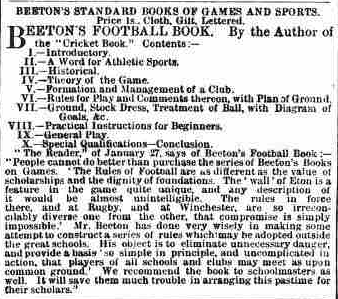 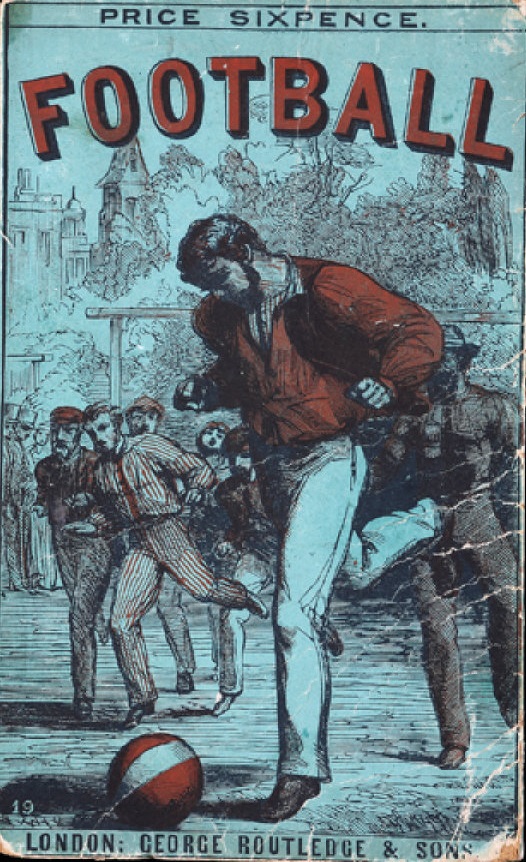 The quality of the advice, which might, to modern ears, sound quite naive, is indicative of the rudimentary state of the game at this point in time:
For excellent fellows at football the prettiest costume is a coloured velvet cap with tassel, a tight striped jersey and white flannel trousers. It is a good plan, if it can be previously so arranged, to have one side with striped jerseys of one colour, say red, and the other with another, say blue. This prevents confusion and wild attempts to run after and wrest the ball from your neighbour.
If you have the good fortune to own a copy you could expect to get £500 for it at auction.

The Lillywhite family had been publishing cricket books since 1848.
The first John Lilywhite's Football Annual appeared in 1868. It was edited by  Charles Alcock, and was called The Football Annual from 1869 to 1908 .  The annuals are exceedingly rare and are commonly known as Charles Alcock's Football Annual.
'Published with the sanction of the Football Association', the annual was a combination of rule book, instruction manual, and club directory. It contained advertisements for sports goods.
The 85 page 1868 edition covered both Association and Rugby codes.