cancel confirm NSFW Votes: (0 votes)
Are you the publisher? Claim or contact us about this channel.
0
Showing article 202 of 562 in channel 31949556
Channel Details:
Viewing all articles
Browse latest Browse all 562
0
0 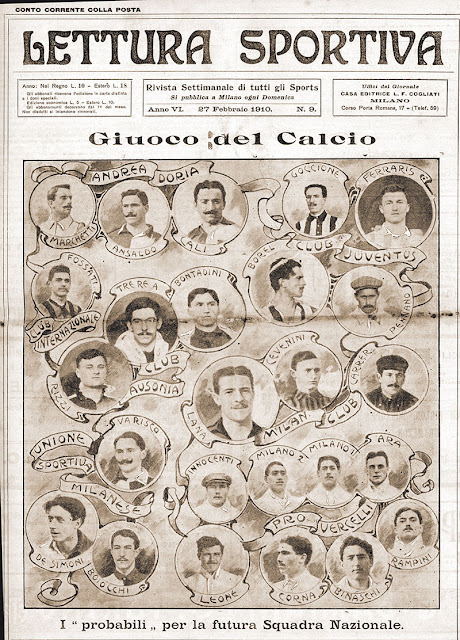 25 footballers identified as 'probables ' for the future Italian national team by Lettura Sportiva in February 1910.
The first Italian XI in May of that year featured 10 of these players (marked *), and 19 of those featured eventually represented their country.  It seems surprising that Genoa CFC or Torino are not represented.

The players (and their clubs) are as follows:

Andrea Doria
Luigi Marchetti
? Ansaldo
Francesco Cali*
Of the 3 players from the Genoese club only the defender Francesco Cali (who had previously represented Switzerland) attained international honours.
Juventus
Giovanni Goccione
Alfredo Ferraris
Ernesto Borel
Umberto Pennano
None of these players made the international XI.
Club Internazionale
Virgillio Fossati*
Internazionale had only been founded in 1908, and this was the year of their farcical first scudetto. Centre half Fossati was killed in battle in 1918.

All 3 were capped. Bontadini was selected for the first international  but couldn’t play due to medical school commitments. When selected for international duty he had moved on to Internazionale.
Ausonia Football Club was a Milan based team that folded in 1912.
Milan  Foot-Ball and Cricket Club
Pietro Lana *
Aldo Cevenini*
Gustavo Carrer

Unione Sportiva Milanese
Franco Varisco *
Mario De Simoni*
Arturo Boiocchi *
USM originally wound up in 1928
Pro Vercelli
Giovanni Innocenti
Giuseppe Milano
Felice Milano
Guido Ara
Pietro Leone
Carlo Corna
Angelo Binaschi
Carlo Rampini
Pro Vercelli were the big guns of Italian football, and the inclusion of 8 of their players shows how highly they were regarded. However, in between the publication of this magazine and the selection of the first Italian XI Pro Vercelli were ostracised for their refusal to play Internaziuonale in a championship play-off, instead fielding a team of 11-15 year olds (of which more soon!). As a consequence of this the Pro Vercelli stars had to wait a while for their international debuts.