cancel confirm NSFW Votes: (0 votes)
Are you the publisher? Claim or contact us about this channel.
0
Showing article 208 of 562 in channel 31949556
Channel Details:
Viewing all articles
Browse latest Browse all 562
0
0
When we think of the professional football clubs of the industrialized north that came to dominate the game in the 1880s, it is easy to consider them as being an entirely different entity from the southern clubs of the amateur gentlemen. There was, however, a thread that linked many of the clubs of Lancashire to the public schools from which Association football had developed in the 1860s.
Turton, probably the first Lancashire side, were founded by Old Harrovians (of which more later). The case we will look at here is that of the team that really put the cat among the pigeons by reaching the FA Cup Final in 1882, Blackburn Rovers. 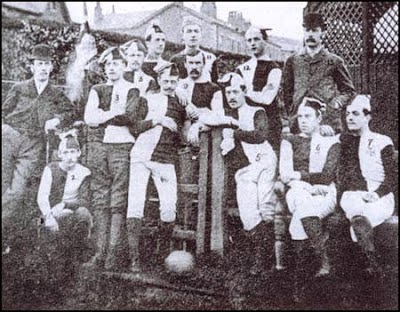 1878:Notice in the picture above how there is inconsistency in the jerseys.
The 'quartered ' shirts and the Maltese Cross motif that Rovers wore in the early days pointed to their (surprising) public school origins. Founder  Arthur Constantine was an Old Salopian (Shewsbury). 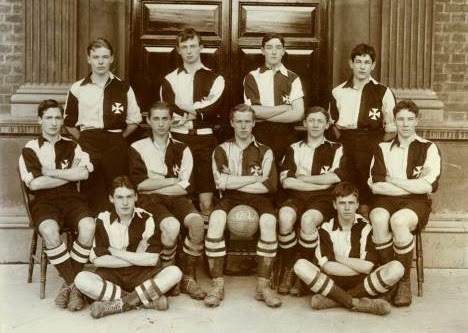 
According to Charles Francis in The History of Blackburn Rovers (1925) several of the 17 present at the  St Leger Hotel On 5th November 1875 were young fellows who had just finished their education at public schools.
The stipulation in setting out the club livery was that a Maltese cross be worn on the left breast This motif was worn by both the Shrewsbury and Malvern school teams. 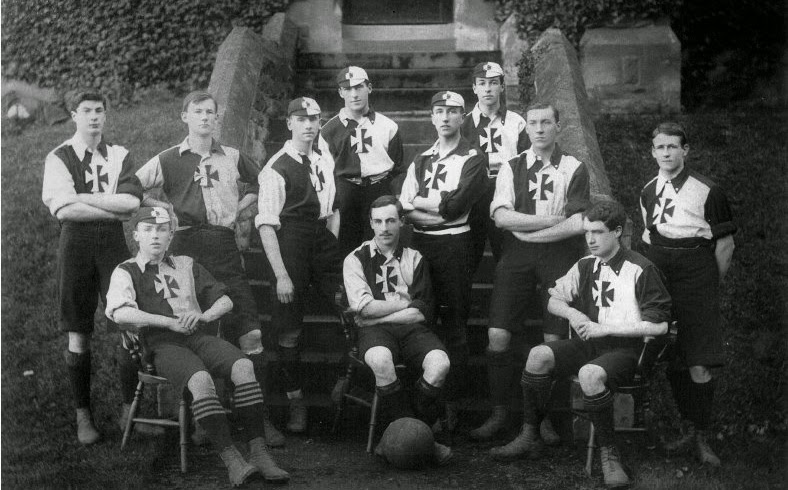 Malvern College  provided Rovers with players such as the Greenwood brothers (Thomas, Harry and Doctor) and Fred Hargreaves.

Blackburn Rovers' strip remains one of the most readily recognisable in the world of football, and was much imitated. However, when their first chance of glory came as they reached the FA Cup Final in 1882 they were denied the opportunity of wearing their famous strip.The 11th FA Cup Final was the first to necessitate a change of colours.
John Lewis recalls a letter from Alcock- there is no evidence that a coin was tossed or any lots were drawn in order to decide who changed kit- Rovers were instructed, by letter. Lewis was convinced that this was a bad omen. Rovers also requested assistance with their travelling expenses; the FA declined.

On the day Rovers wore narrow black and white  hoops in the mode of Queen's Park. Old Etonians wore harlequin shirts of light blue and white (a departure from their previous plain light blue). 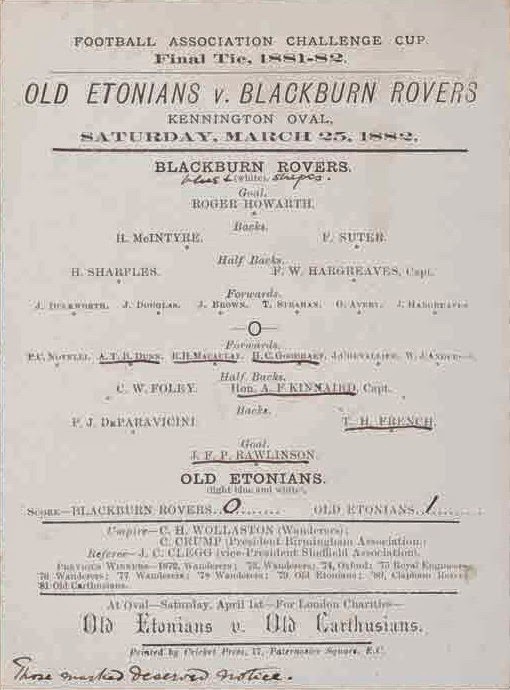