cancel confirm NSFW Votes: (0 votes)
Are you the publisher? Claim or contact us about this channel.
0
Showing article 228 of 562 in channel 31949556
Channel Details:
Viewing all articles
Browse latest Browse all 562
0
0 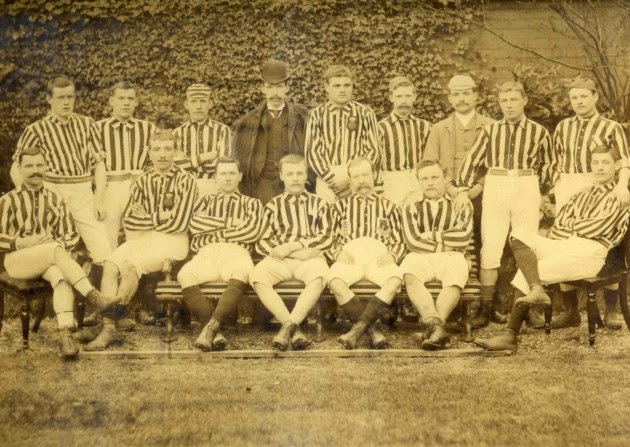 The Mids played in black and white stripes

Derby had a football club as early as 1869- Derby Town FC. The Midland Railway Football Club
was founded in 1881 and was soon known by their familiar name Derby Midland, or The Mids. Derby Town, eclipsed by the newcomers, went out of existence in 1882.
Midland's popularity inspired the formation of another team- in 1884 Derbyshire County Cricket Club decided to form a football section. Having rejected the name Derbyshire County Football Club they settled for the snappier Derby County.
The fact that a number of Midland players joined the new County club was a source of great animosity that led to the 2 clubs refusing to play each other for 3 years.
When the Football League was founded in 1888 a one club per town principle was applied. Being overlooked in favour of County, Midland became founder members of the Midland League in the 1889-90 season.
In June 1891 the 2 clubs 'merged'. In fact the merger was a takeover.  The Midland Railway Company withdrew funding from the club, who were forced to consider  reverting to amatuerism. However  County agreed to cover Midland's debts and took on the Midland players (including a promising 17 year old inside forward called Steven Bloomer!). There was some speculation that Midland would survive as a second team and continue to play in the Midland League, but the takeover ensured their dissappearance.

I have found evidence of the following meetings between The Mids and County: