cancel confirm NSFW Votes: (0 votes)
Are you the publisher? Claim or contact us about this channel.
0
Showing article 237 of 562 in channel 31949556
Channel Details:
Viewing all articles
Browse latest Browse all 562
0
0 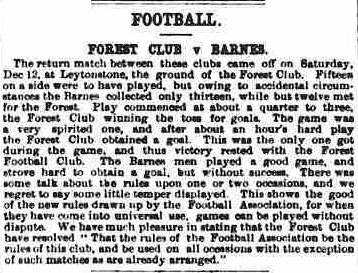 Bell's Life in London and Sporting Chronicle- 19.12.63
The Forest Club was founded by CW and JF Alcock.  JF Alcock was a delegate at the 6  Football Association meetings held in October-December 1863 and was elected onto the first FA Committee in 1864.
The cutting contains an early reference to the Football Association's ideal of seeing their new rules adopted universally.
Viewing all articles
Browse latest Browse all 562
More Pages to Explore .....
© 2022 //www.rssing.com