cancel confirm NSFW Votes: (0 votes)
Are you the publisher? Claim or contact us about this channel.
0
Showing article 250 of 562 in channel 31949556
Channel Details:
Viewing all articles
Browse latest Browse all 562
0
0
To be the Champion of Britain was, as we have seen, the equivalent of being the Champion of the World. The domestic football of England and Scotland was without equal well into the 20th century.
From the 1870s onwards there were showdowns between English and Scottish clubs , both formal and informal, and then in 1902 a tournament called The British league Cup was played.
Unfortunately this was not the grand championship that it might have been. The tournament was set up by Glasgow Rangers as a fundraiser for victims of the Ibrox Disaster. The trophy Rangers donated was the £100 Exhibition Cup that they had won by beating Celtic at the Glasgow International Trade Fair the previous year.
The four teams that took part in the British League Cup were the League Champions and runners up from the recently ended domestic season in England and Scotland, namely Sunderland, Everton, Glasgow Rangers and Celtic.

Billy Hogg was the only Englishman in the Sunderland team. Both sides were considered to be below full strength and receipts of £100 were taken.

20 minutes of extra time was played.

03.05.02-  Glasgow Rangers 3 Everton 2
The replay was held at Celtic Park. Four of the Rangers players from the first match were absent, as they were playing in the international at Villa park that day (this was the 'replay' of the Ibrox game at which the tragedy occurred) the players were Nicol Smith, Drummond, Robertson and Alex Smith. Everton's Jimmy Settle appeared for England. 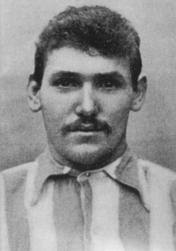 Jimmy Quinn
Celtic's Jimmy Quinn scored 3 goals in the final.
*Some sources state that this match was played at Celtic Park- a report in The Edinburgh Evening News (02.05.02) makes it clear that this was not the case.