cancel confirm NSFW Votes: (0 votes)
Are you the publisher? Claim or contact us about this channel.
0
Showing article 268 of 562 in channel 31949556
Channel Details:
Viewing all articles
Browse latest Browse all 562
0
0

The first time that League football was played on Xmas Day was in 1889, the second season of League football.
In heavy conditions before a crowd of 6-7,000, top of the table Preston North End entertained Aston Villa at Deepdale. 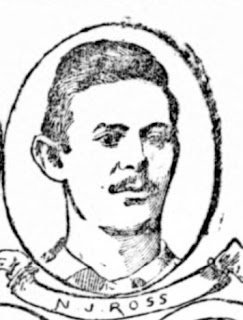 North End took a 6th minute lead and then came back from 2-1 down to win 3-2.
When reading up on this match I was surprised to note that the scorer of Preston's goals was Nick Ross- one of the leading fullbacks of the era.
Ross had risen to prominence as a left back. In the 1888-89 season (when he was at Everton, reputedly earning £10 a week) he had played 2 games at centre forward, scoring once.
On his return to Preston for the 1889-90 season Ross played 16 of his 23 matches at centre forward, clocking up 24 goals.
Remarkably, with the exception of a match against Burnley in 1891 in which he played at outside right, all the remaining games of Ross' career were played as a back! He finished with a career total of 31 goals from his 6 seasons during the Football League era.
Incidentally the contemporary press referred to Ross (or Ross senior, as his younger brother Jimmy was also at Preston North End) as both Nick and Jack.  The great football writer Jimmy Catton (Tityrus) called him Nick- and that's the example I'll follow as Catton was very close to the Preston North End players.

A Mother’s Love: Verna White was raped and beaten by Gerald A. Lee, an old... Psycho For Love: Teresa Perez shot & killed Justyn Rosen when he tried to...