cancel confirm NSFW Votes: (0 votes)
Are you the publisher? Claim or contact us about this channel.
0
Showing article 300 of 562 in channel 31949556
Channel Details:
Viewing all articles
Browse latest Browse all 562
0
0 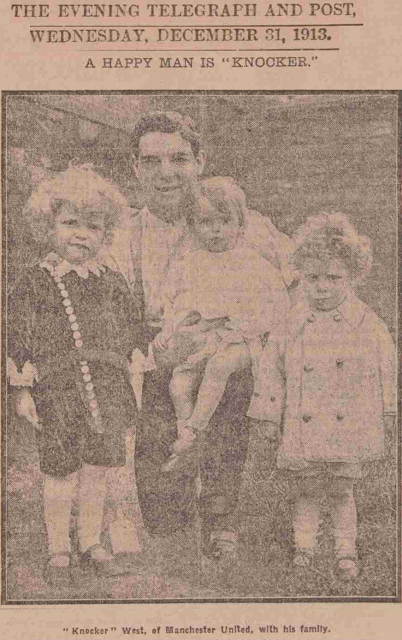 Enoch West signed for Sheffield United as a 17 year old, but he failed to break into the first team and returned to minor football.
2 years later, in 1905, he joined Nottingham Forest. He scored 100 goals in 184 appearances for Forest.
In 1910 he joined Manchester United.

West was one of the players suspended indefinately by the Football Association following the revelation that the Good Friday match between Manchester United and Liverpool had been fixed.
The sorry tale is covered in depth in Graham Sharpe's Free the Manchester United One: The Inside Story of Football's Greatest Scam.


Betting on the correct score was unusual in those days. Mr Giles , a bookie in Hucknall, gave evidence that an exceptionally large number of bets were placed on a 2-0 scoreline, so much so that he stopped taking them. He still lost over £150.The fixing took place in the context of concerns that players would face hardship when football was suspended (the War had begun in 1914 and the Football League had been criicised for proceeding with the 1914-15 season). 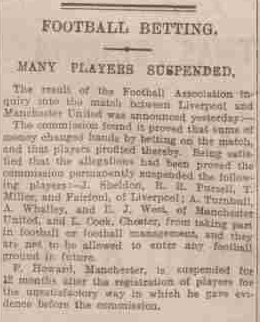 The ban extended to preventing the men from entering any football ground in the future...

West protested and sued the FA  and  the Hulton publishing group for libel. The case was heard in July 1917 and West was unsuccesful.
Sandy Turnbull was killed while serving in the war, but all the other players, except West, had their bans lifted by the FA in 1919 in recognition of their service to the country; Turnbull received a posthumous reinstatement.
I can only assume that West was omitted from the amnesty for having the temerity to challenge the authority of the FA.. With an element arch black humour West's ban was lifted in 1945 when he was 59 years old.

The players suspended were:

Tom Fairfoul (wing half, 34yrs)   Liverpool
Reinstated but did not return to football.
Tom Miller (forward, 24 yrs)        Liverpool
When the ban was announced Miller had already joined the army. Following suspension Miller returned to his native Scotland. When his ban was lifted he rejoined Liverpool. In 1920 he signed for Manchester United! After finishing his career in Scotland he had a very brief spell as manager of Barrow.
Bob Pursell (full back, 26 yrs)      Liverpool
Rejoined Liverpool in 1919 and moved to Port Vale in 1920.
Jackie Sheldon (winger, 27 yrs)   Liverpool
Sheldon joined Liverpool from Manchester United in 1913. At the time the ban was announced he was on active service on the western front. After the war (and the lifting of the ban) he played 2 further seasons for Liverpool.
Sandy Turnbull (forward, 30 yrs) Manchester United
Turnbull didn’t play in the Good Friday match. Turnbull was killed in action in Arras (1917). His life ban was posthumously rescinded by the Football Association in 1919 (!).
Enoch West (forward, 28 yrs)      Manchester United
Life ban lifted in 1945 (!)
Arthur Whalley (half back, 29 yrs)             Manchester United
Returned to United for the 1919-20 season.
Lol Cook (centre forward, 30yrs)                Chester
Cook’s career was over by the time of the enquiry.
Fred Howard (centre forward, 24 yrs)      Manchester City
At the end of his 1-year suspension (imposed for the unsatisfactory way in which he gave evidence) Howard returned to City. He later played for Gillingham, Wrexham, New Brighton and Port Vale. 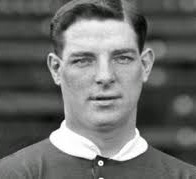