cancel confirm NSFW Votes: (0 votes)
Are you the publisher? Claim or contact us about this channel.
0
Showing article 34 of 562 in channel 31949556
Channel Details:
Viewing all articles
Browse latest Browse all 562
0
0 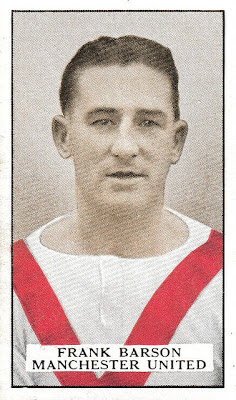 Imagine Nobby Stiles, Bryan Robson and Roy Keane rolled into one and the hardness multiplied by 10. That's the image that history tends to portray of the 6 foot tall half back Frank Barson.
Whether or not he actually carried a  gun into a negotiation over pay,it is often claimed that  Barson was one of the hardest characters to grace the English game. As such he also became something of a target for referees, Famously Jack Howcroft approached Barson before the 1920 Cup Final and warned  him that he would send him off as soon as he stepped out of line.
If we consider the hard evidence though- in 394 League, FA Cup and international matches he was only sent off 3 times! So either his reputation has been enhanced by romanticism or referees were far more tolerant back then.
Barson's Villa career had suffered as a result of his refusal to move to Birmingham from Sheffield, where he had business interests. He was capped by England on 1 occasion, playing in a 2-1 defeat against Wales in 1921.
On one occasion Barson, then with Watford, was suspended for 6 months for an assault that seems to have occurred only in the mind of the referee.
At Manchester United he was celebrated for his leadership skills, but when the club presented him with a pub, he promptly gave it away...