cancel confirm NSFW Votes: (0 votes)
Are you the publisher? Claim or contact us about this channel.
0
Showing article 362 of 562 in channel 31949556
Channel Details:
Viewing all articles
Browse latest Browse all 562
0
0
During the first three seasons of its existence, the Birmingham FA followed the Sheffield Rules.
They only adopted the 'London Rules' of the Football Association when Birmingham clubs began to take an interest in the FA Cup.  Calthorpe, Aston Villa and Birmingham* entered in 1879.
The first representative match between the Sheffield an Birmingham Associations took place in November 1875. 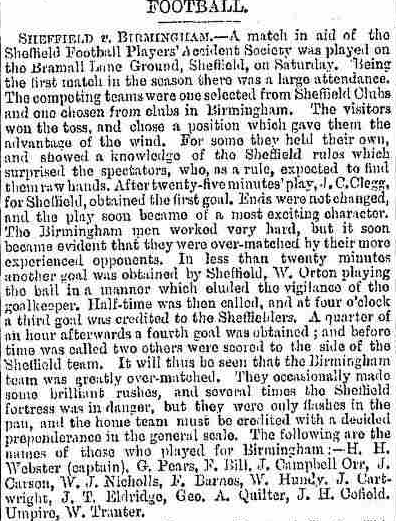 Birmingham Daily Post - 22.11.75
The description of Orton's goal is priceless!  Interesting to note the existence of the Sheffield Footballers' Accident Society. The insurance scheme was launched in 1867. Players paid in a shilling - if a football injury prevented them from working they received 12 shillings per week.
* This club had no connection with the later Birmingham (City)
Viewing all articles
Browse latest Browse all 562
More Pages to Explore .....
© 2022 //www.rssing.com