cancel confirm NSFW Votes: (0 votes)
Are you the publisher? Claim or contact us about this channel.
0
Showing article 366 of 562 in channel 31949556
Channel Details:
Viewing all articles
Browse latest Browse all 562
0
0 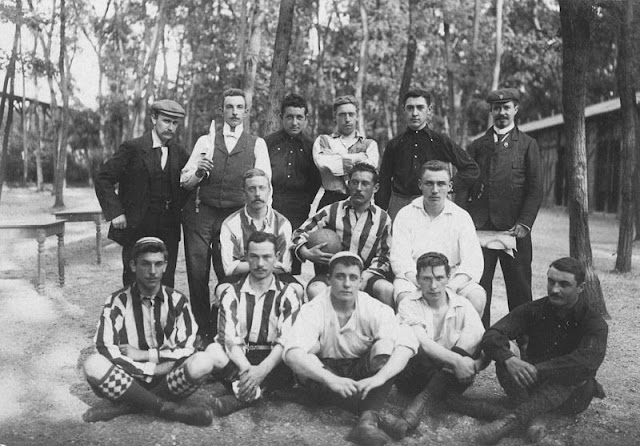 'Belgium'
The 1900 Olympics were a rather protracted affair lasting from May 14th  to  October 28th. It ran concurrently with L'Exposition de Paris 1900.
Association football, making its first appearance, was effectively an exhibition sport. 2 matches were played  at The Vélodrome de Vincenneson 20th and 23rd of September. The 'tournament' provides us with an illustration of how misleading the IOC's practise of retrospectively designating medal status to these early tournaments is. At best it creates a false impression of the nature of international competition at the time. At worst it detracts from the achievements of later winners.
The original plan had been to hold a series of matches in which 'France' would play against leading club teams from England, Switzerland, Belgium and Germany.
Switzerland and Germany did not take up the offer.
Great Britain were eventually represented by the rather modest Upton Park. Union des Sociétés Françaises des Sports Athlétiques selected Havre Athletic Club to represent France, but they declined and  the reigning Parisian champions Club Français stood in.
Similarly Racing Club de Bruxelles declined to represent Belgium. Frank König, a Racing player, was asked by the KBVB to put together a representative side, but he was unable to come up with the goods. The "Fédération Universitaire"were then asked to assemble a team of students. Again this was not a success and newspaper advertisements were placed. eventually a party of 10, including an Englishman (Thornton) and a Dutchman (van Heuckelum) travelled to Paris. Eugène Neefs was in Paris at the time, saving the Belgians the embarrassment of turning out one short.
The Belgian XI was:
Marcel Leboutte (Spa FC) - René Kelecom (FC Liégois), Ernest Moreau de Melen (FC Liégeois) - Alphonse Renier (Racing Club de Bruxelles), Gustave Pilgrims (Léopold Club de Bruxelles), Eugène Neefs (Sporting Club de Louvain) - Eric Thornton* (Léopold Club de Bruxelles), Hendrik van Heuckelum (Léopold Club de Bruxelles), Hilaire Spanoghe (Skill FC), Marius Delbecque (Skill FC), Lucien Londot (FC Liégeois)
As you can see, the players turned out in their club kit.
The Belgians were a goal down inside a minute, but came back to lead 2-1 at the interval.
The second half was one-way traffic, however, with the France XI eventually winning 6-2.

And on the back of this defeat the record of the IOC lists this scratch team of  Belgian students as being  Olympic bronze medalists. Hoe belachelijk!

*Thornton would later represent Belgium in 2 internationals (as a goalkeeper).