cancel confirm NSFW Votes: (0 votes)
Are you the publisher? Claim or contact us about this channel.
0
Showing article 407 of 562 in channel 31949556
Channel Details:
Viewing all articles
Browse latest Browse all 562
0
0 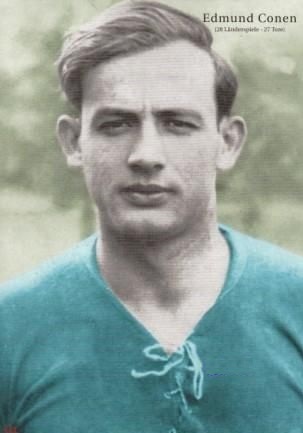 Edmund Conen's career was divided into two halves; 1934-1935 and 1939-42. The Saarbrücken forward made his debut as a 19 year old, scoring twice against Hungary. His next international came at the World Cup in Italy, where he scored 3 goals in 20 minutes to give Germany victory over Belgium.
Up to September 1935 Conen played in 14 internationals, scoring 14 goals (including a further 2 hat tricks).
Conen then vanished from top class football for the best part of 4 years.
He was suffering from a mental disorder which was characterized by a somatic preoccupation with his heart, believing himself to be seriously ill.
Remarkably he recovered to go on to an equally prolific 'second' career- scoring 13 goals in 13 internationals.