cancel confirm NSFW Votes: (0 votes)
Are you the publisher? Claim or contact us about this channel.
0
Showing article 442 of 562 in channel 31949556
Channel Details:
Viewing all articles
Browse latest Browse all 562
0
0 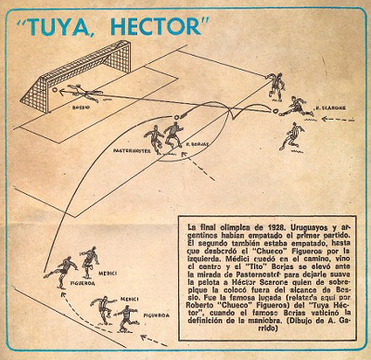 The 1928 Olympic Final replay.
Roberto Figueroa gets past Segundo Medici and sends in a cross; René Borjas beats Paternoster and heads the ball into the path of the oncoming Hector Scarone. 'Yours, Hector!'
2-1 Uruguay, 73rd minute.
The illustration is not contemporary as the artist has drawn a D (penalty arc).
I have seen evidence of the D being used on the continent before 1937 (I will cover this in a later post- someday!)
At 3:54 in the film it does look like there is a D!