cancel confirm NSFW Votes: (0 votes)
Are you the publisher? Claim or contact us about this channel.
0
Showing article 46 of 562 in channel 31949556
Channel Details:
Viewing all articles
Browse latest Browse all 562
0
0 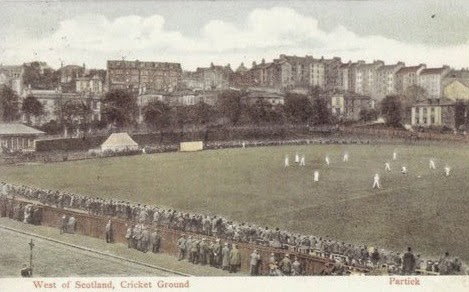 Cricket was being played in Hamilton Crescent before the West of Scotland Cricket Club was founded in 1862.
Hamilton Crescent's place in sporting history was assured when it was chosen by Queen's Park to host what is considered to be the first ever international Association football match.
As we have seen , Charles Alcock had , in his enthusiasm to spread the association game, instituted 'international' matches in 1870. The 'Scottish' teams involved were not truly representative, the players usually having only tenuous connections with Scotland. Alcock didn't want this to be the case, however. He wanted genuine Scottish representation, as we can see from the following letter, which appeared in  The Glasgow Herald in November 1870:
ENGLAND versus SCOTLAND
Sir,—Will you allow me a few lines in your paper to notify to Scottish players that a match under the above title will take place in London on Saturday, 19th inst, according to the rules of the Football Association? It is the object of the committee to select the best elevens at their disposal in the two countries, and I cannot but think that the appearance of some of the more prominent celebrities of football on the northern side of the Tweed would do much to disseminate a healthy feeling of good fellowship among the contestants, and tend to promote to a still greater extent the extension of the game. In Scotland, once essentially the land of football, there should still be a spark left of the old fire, and I confidently appeal to Scotsmen to aid to their utmost the efforts of the committee to confer success on what London fondly hopes to found, an annual trial of skill between the champions of England and Scotland. Messrs. A. F. Kinnaird, 2 Pall Mall East, London, and J. Kirkpatrick, Admiralty, Somerset House, London, will be glad to receive the names of any Scottish player who will take part against England in the match in question.—I am, etc.,
Charles W. Alcock, Hon. Secretary of Football Association.
West Dulwich, Surrey, 1st November, 1870.
Queen's Park responded to the letter by asking if one of their members could play, They nominated Robert Smith (conveniently he had recently moved to London and was playing for South Norwood). Smith consequently played in the 2nd and 3rd 'Alcock Internationals'.
Queen's Park wrote to Alcock in the summer of 1872. What was happening regarding international matches? would the Football Association be disposed to send a team to play Scotland in Scotland? In effect the  Queen's Park club assumed responsibility for responding to Charles Alcock's challenge to Scottish footballers. There was no Scottish Football Association at the time. Queen's Park were in effect the governing body in Scottish football, as well as dominating the game on the pitch they were also arbiters and guardians of the rules. One thing that they didn't have, however, was a ground of their own. They still played in public parks. 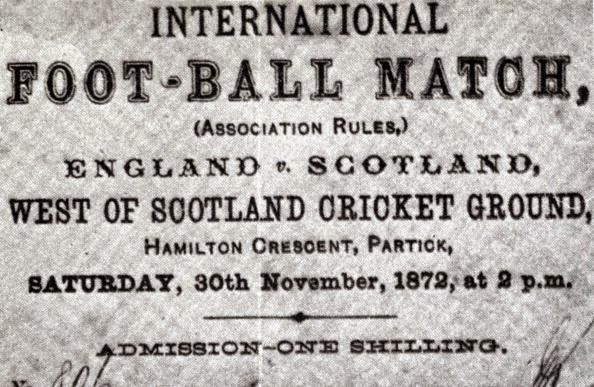 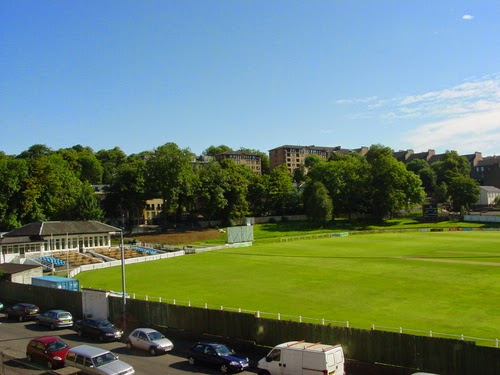 Queen's Park were devilishly good at organizing things. They set up subcommittees to handle every aspect of preparing for the visit of the English.  The West of Scotland Cricket Club were approached regarding the use of Hamilton Crescent. Queen's Park anticipated the match being a lucrative event. The following terms were agreed:
West of Scotland Cricket Club to receive £10* for staging the match and and a further sum of £10 should the receipts exceed  £50.
This was a bold move by Queen's Park, who only had £7 in their account and had been offered the Burnbank Rugby ground free of charge.
It paid off, though, as the takings reached £102 19s. 6d. Admission was 1 shilling and the attendance topped 4,000.
The match cost a total of  £69 11s. 6d to stage, leaving Queen's Park a balance of £33 8s which they used to fund their journey to London for the following season's international.
One thing about this first international troubles me- if, according to  F.I.F.A. regulations, a match must be organised according to the prescribed rules by two National Football Associations, then should this game be considered a full international? There was no Scottish FA. Queen's Park organised the match, selected the team and provided all the players (who incidentally played in Queen's Park's colours).
Hamilton Cresecent had served it's purpose well, though. Queen's Park moved into the first Hampden Park in 1873, but the internationals of 1874 and 1876 were both played in Hamilton Crescent, as were the first 2 matches of the 1877 Scottish Cup Final between Glasgow Rangers and Vale of Leven. (It took 2 replays to settle the tie- the 2 matches at Hamilton Crescent were drawn, 1-1).
* 1872 Pre decimal money: 1 pound (£) = 20 shillings (s). 1 shilling = 12 pence (d). A general labourer earned about £1 per week.