cancel confirm NSFW Votes: (0 votes)
Are you the publisher? Claim or contact us about this channel.
0
Showing article 469 of 562 in channel 31949556
Channel Details:
Viewing all articles
Browse latest Browse all 562
0
0 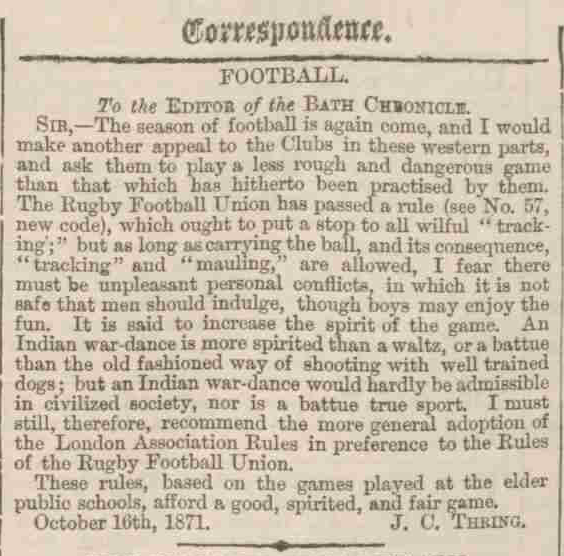 John Charles Thring was instrumental in developing two sets of rules during the pre-history of football.
The Cambridge Rules of 1848 were an attempt at a compromise / unified code based on the games played at Eton, Harrow, Rugby, Winchester, and Thring's old school, Shrewsbury.
In 1862 Thring was a master at Uppingham School when he developed 'The Simplest Game' (also known as  'The Uppingham Rules').
These rules had some influence on the Football Association when they began formulating the Laws of the Game in 1863.
Of course, whilst giving us the greatest and most popular game in the world, the Football Association ultimately failed in their goal of unifying football.
Debates as to the relative merits, safety and propriety of football and Rugby feature widely in newspaper correspondence in the 19th century.
Thring's appeal here went unheeded, and the west of England became something of a Rugby stronghold.