cancel confirm NSFW Votes: (0 votes)
Are you the publisher? Claim or contact us about this channel.
0
Showing article 507 of 562 in channel 31949556
Channel Details:
Viewing all articles
Browse latest Browse all 562
0
0 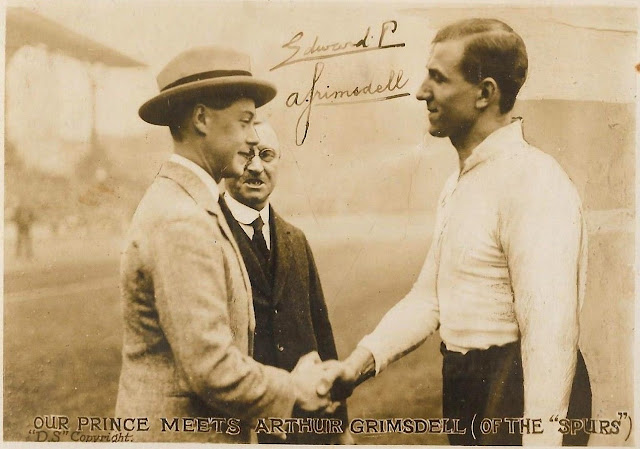 Arthur Grimsdell made his debut for Tottenham Hotspur in April 1912.
His career was interrupted by the 1914-18 war.
He had been touted as an England international as early as 1913, and played in 2 Victory Internationals in 1919, but his full international debut was delayed until 1920. He represented England 6 times, captaining on 3 occasions.
The picture shows The Prince of Wales, later King Edward VIII, meeting Arthur Grimsdell prior to the match between Spurs and Chelsea at Stamford Bridge on 16th October 1920. Spurs won 4-0. Earlier that month Spurs had beaten Chelsea 5-0 at White Hart Lane.
Grimsdell was back at the Bridge the following March, meeting King George V and the Duke of York as Tottenham won the FA Cup.