cancel confirm NSFW Votes: (0 votes)
Are you the publisher? Claim or contact us about this channel.
0
Showing article 77 of 562 in channel 31949556
Channel Details:
Viewing all articles
Browse latest Browse all 562
0
0 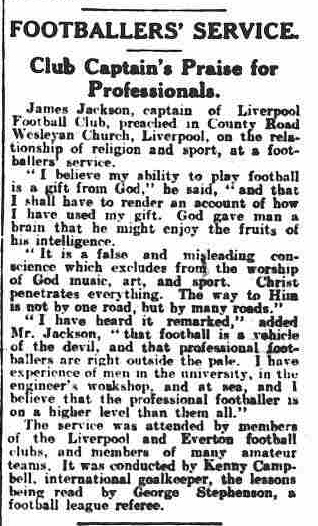 James Jackson Jnr.
Son of  the former Woolwich Arsenal skipper James Jackson Senior, James Jackson Jnr. was an extraordinary man. Cousin of Australian test cricketer Archie Jackson, he began his career in Scotland, playing for Queen's Park, Motherwell and Aberdeen before moving to Liverpool.  Jackson represented both the Scottish League and the Football League in inter league fixtures.
On retiring from football he was ordained as a minister of religion having studied at Cambridge University whilst still playing for Liverpool.

Kenny Campbell
By the time this service was held Campbell was coming to the end of his football career, and was in his second spell with New Brighton. The heartthrob of Anfield , he had joined Liverpool from Cambuslang Rangers in 1911 and spent 9 seasons with the Reds, during which he was capped 8 times by Scotland. As well as New Brighton he later played for Partick Thistle, Stoke  and Leicester City.