cancel confirm NSFW Votes: (0 votes)
Are you the publisher? Claim or contact us about this channel.
0
Showing article 105 of 562 in channel 31949556
Channel Details:
Viewing all articles
Browse latest Browse all 562
0
0 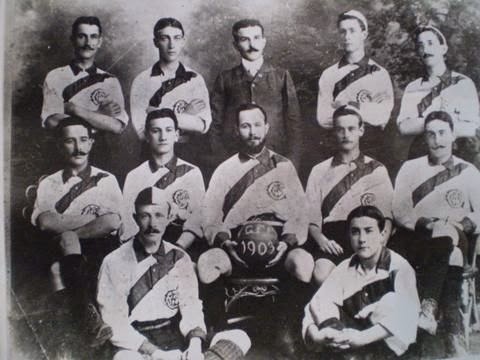 Guatemala Foot-Ball Club 1903
Football came to Guatemala in 1902 with the return of as group of students who had studied in Britain and Belgium.
Carlos Aguirre Matheu is generally recognised as the foremost of these footballing pioneers. He, along with his brother Jorge, Delfino Sánchez-Latour and Eusebio Murga, studied at St George's College, London.  They were joined by a number of compatriots: Francisco Sánchez-Latour studied at Cooper's Hill Naval College (London) Luis Pedro Aguirre, Rafael Rodezno and Lorenzo Fonseca attended  Crystal Palace Engineering College (London) whilst  Rafael Aparicio was at Brighton College and Melle in Belgium (reputedly the site of the first football played on the European continent in 1863).
Guatemala Foot-Ball Club was founded on 23rd August 1902. The first match was played on 14th September between 2 scratch teams made up of club members, designated the Blues (Azules) and Whites (Blancos).
They lined up as follows:

Competitive football began in Guatemala in 1904 with the Copa Centroamericana, the first of a  series of cup competitions that followed unusual formats (for example the 1904 Copa Centroamericana was a 10 match series between just 2 clubs; 1905 a 15 match series between 3 clubs. Guatemala FBC were runners up in both these tournaments).
There was then a 6 year hiatus until the inauguration of  the Copa Manuel Estrada Cabrera in 1911. Guatemala FBC won this competition  in 1913 and 1914.
By the time a league was formed (Liga Capitalina in 1919), Guatemala FBC had  faded from prominence, although they did claim the title in 1932.