cancel confirm NSFW Votes: (0 votes)
Are you the publisher? Claim or contact us about this channel.
0
Showing article 124 of 562 in channel 31949556
Channel Details:
Viewing all articles
Browse latest Browse all 562
0
0 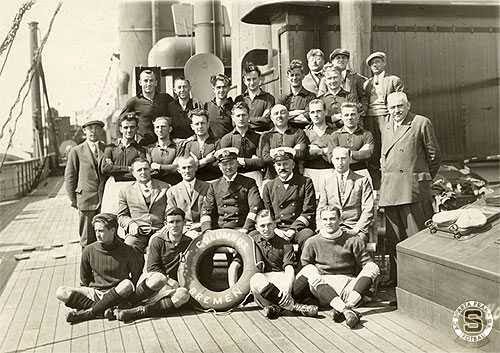 The voyage
Sparta Prague won the Stredoceska I. Liga (Czech national Championship) in the 1925-26 season. In the autumn of 1926 they undertook a 2 month tour of North America. It was a strong squad; of the 18 players who went on the tour 17 won international honours. Jan Dvořáček, league top scorer with 32 goals (from 18 games!) did not travel. 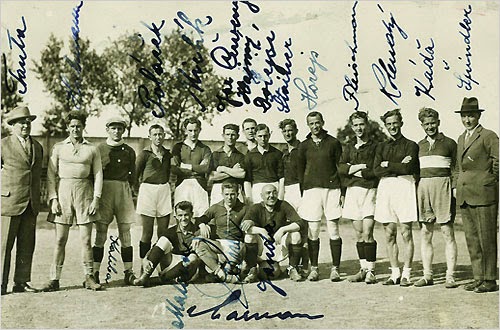 Standing:
Josef Fanta
Fanta managed the Czech national team throughout the 1920s and up until 1933.
František Hochmann
7 Czechoslovakia caps. Goalkeeper.
Antonín Kaliba
Kaliba was loaned from Union Žižkov to cover the injured Hochmann and stayed on for the tour. He had kept goal 7 times for Czechoslovakia back in 1922-23.
Jaroslav Polacek
Represented Czechoslovakia once in 1925. Forward.
Josef Miclik
Spent 4 seasons at Sparta and won 2 league titles. Forward.
Jaroslav Červený
7 caps for Czechoslovakia, he remained in the USA following the tour, Playing for Sparta of Chicago.
Halfback.

Karel Steiner
4 years at Sparta sandwiched between 4 and 7 year spells at Viktoria Žižkov. Steiner was a 1920 Olympian, and won a total of 14 caps. Fullback.


Antonín Perner
In 14 years at Sparta he won 8 league titles. A veteran of the 1920 Olympics, Perner won 28 international caps for Czechoslovakia.Halfback.

Antonín Janda-Očko
34 year old Janda effectively came out of retirement for this tour. He had last played competitively in 1923. In 10 internationals he scored 12 goals and won 5 league titles with Sparta. Inside forward.

Not in picture:
Antonin Carvan
Carvan joined Sparta from Viktoria Žižkov late in the domestic season. He represented Czechoslovakia 14 times and later played in France with Nimes.
Halfback.


Fall River played a league match against Springfield on the morning of their meeting with Sparta, and several Springfield players guested for the Marksmen in the second game.
Sparta Chicago (Sparta Athletic and Benevolent Association Football Club) was founded by Czech migrants in 1917 and dominated Illinois football from 1927 onwards.
Brooklyn Wanderers featured 3 former Hakoah Vienna players (Neufeld, Drucker and Schoenfeld).