cancel confirm NSFW Votes: (0 votes)
Are you the publisher? Claim or contact us about this channel.
0
Showing article 213 of 562 in channel 31949556
Channel Details:
Viewing all articles
Browse latest Browse all 562
0
0

Let me say at the outset that I have got absolutely nothing against Stoke City or its supporters.
It's just that their claimed foundation date of 1863 has always struck me as being somewhat spurious. In identifying 1863 as the foundation date historians have contrived to assimilate 2 events separated by 5 years.
I will further anger Stoke fans by presenting evidence that the club formed as Stoke Ramblers in 1868 ceased to exist in 1908 and an entirely new club was formed in its place,

1863
It is an historical fact that football was played in Stoke on February 17th, 1863. It was Shrove Tuesday, and it was reputedly the first time such a spectacle had occured in the town. It was a hybrid  Pre Association version of the game, overseen by Mr John Whitta Thomas, the 37-year-old headmaster of St Peter’s School.
It was Liverpool born Mr Thomas and The Right Reverend Sir Lovelace Tomlinson Stamer who were responsible for introducing football to The Potteries.
Rt.Rev. Stamer was an archetypal Good Victorian, founding schools and other charitable organizations (including a hostel for female ex prisoners). He was also keen on promoting sports.
Accounts published in 1963 suggest that Mr Thomas and other schoolmasters were then responsible for founding a football club.
1868
The notion that a Charterhouse pupil would be apprenticed to a Staffordshire railway company at the age of 13 is beyond belief.
In The Book of Football (1906) W.W. Cockbill wrote: Modern football can truly be said to have commenced in 1863, and one of the first clubs that sprang into existence was Stoke, founded by some Old Carthusians – Armand (sic), Bell, Matthews and Philpott.
Armand was In fact, Henry John Almond. Almond, aged 13 in 1863, did not even feature in Charterhouse football until 1867. It was in 1868 that he began his apprenticeship at North Staffordshire Railway Works.
The Field reported in September 1868 : A new club has been formed (in Stoke) for the practice of the Association rules under the charge of H.J. Almond, one of the most prominent performers of the Charterhouse School XI last year.
Note that they were referred to as a new club. There is no reference to them having being in existence for 5 years in any other guise. The football they were playing in 1868 was still of the most casual nature.
The connection between 1863 and Almond's club of 1868 is Mr Thomas, who was Stoke Ramblers' first secretary.
I am not aware of any documentary evidence that John Whitta Thomas had maintained a regular football club in the town between 1863 and 1868.

Stoke dropped the Ramblers from their name and were founding members of the Football League in 1888.


1908
On 27.03.08 6,000 people saw Stoke lose 1-0 to Leicester Fosse at The Victoria Ground. This was the last League match for the original Stoke club. They finished 10th in Division 2 but resigned from the League due to financial problems.
An extraordinary meeting on 11.09.08 unanimously carried the proposal that the club be wound up.
Contemporary press reports consistently refer to the club that was subsequently founded as the new organization. There are also references to the two clubs as separate entities- for example, when the directors of the 'old' club donated £50 to the 'new' club.
Also the 'new' club would have commenced their Birmingham and District League season before the winding up of the 'old' club was proposed on 11.09.08.
Incidentally, the XI who had faced Fosse in April were all at different clubs when September came around: 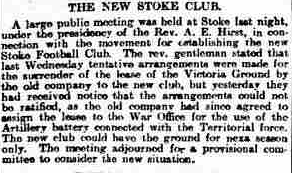 Nottingham Evening Post- 04.09.08
Press reports form 1908 consistently make it clear that the Stoke FC formed that year after the collapse of 'the old club' was considered to be a separate entity.