cancel confirm NSFW Votes: (0 votes)
Are you the publisher? Claim or contact us about this channel.
0
Showing article 325 of 562 in channel 31949556
Channel Details:
Viewing all articles
Browse latest Browse all 562
0
0 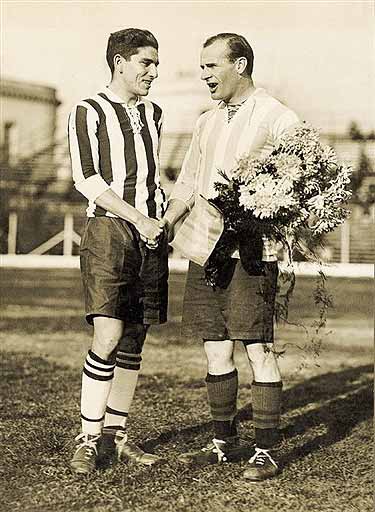 Wherever it appears on the internet, this picture is invariably described as
Copa America 1921. Emilio Solari, captain of  Argentina, greeting  Bartolome Brizuela of Paraguay at the 1921 South American Championship of Nations.
However, Brizuela made his international debut in 1925 and did not appear at the South American Championship of Nations until 1926, whereas Solari's last appearance at the championships was in 1924.
My theory is that the Paraguay player pictured is in fact the legendary Manuel Fleitas Solich.