cancel confirm NSFW Votes: (0 votes)
Are you the publisher? Claim or contact us about this channel.
0
Showing article 327 of 562 in channel 31949556
Channel Details:
Viewing all articles
Browse latest Browse all 562
0
0
On Saturday April 18th 1903 (which was FA Cup Final day) The Wednesday completed their League campaign with a 3-1 win over West Bromwich Albion at Owlerton (goals from Andy Wilson, Fred Spikesley and Ambrose Langley).
Sunderland, in second place , just one point behind, had a game in hand.
The following Saturday Sunderland traveled the 20 km to play their local rivals Newcastle United at St James' Park. A win would see them retain the League title (they had won 4 previous titles in total; Aston Villa held the record with 5).
Newcastle went ahead in the 48th minute- a short range effort from Robert Smyth McColl.
In the latter stages of the game, pressing for the  equalizer, Sunderland changed formation to 1-4-5 (Rhodes 'joining the halves'). Under the rules of the day  this led to  a lot of off sides- much to the anger of the Newcastle fans. 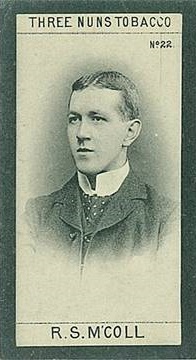 'Toffee Bob' McColl was the founder of a chain of corner shops that can still be seen to this day.