cancel confirm NSFW Votes: (0 votes)
Are you the publisher? Claim or contact us about this channel.
0
Showing article 68 of 562 in channel 31949556
Channel Details:
Viewing all articles
Browse latest Browse all 562
0
0

The East Surrey Regiment, Kolkata, 1890.
It's never particularly cool in Kolkata- about 25C in December and January, so that heavyweight kit and boots must have been hard work.
The British Military helped to spread football with their penchant for recreating English life wherever they went.
Football was particularly popular in Bengal , with the locals founding clubs and aspiring to be able to challenge the English.
The first notable triumph for an Indian club  came in 1892 when Kolkata's Savabazar FC  defeated The East Surrey Regiment  in the Trades Cup final .

The East Surrey Regiment feature in another curious episode. On July 1st, 1916 , The first day of the Battle of The Somme, Captain Billy Nevill gave his players 2 footballs with which to lead their assault on the enemy positions. On the balls was written: The Great European Cup-Tie Final. East Surreys v Bavarians. Kick off at zero and NO REFEREE. 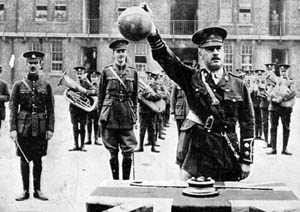 Remarkably, given the carnage that followed, one of the balls was retrieved and returned to the regiments HQ. 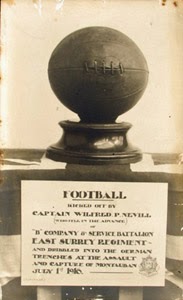