cancel confirm NSFW Votes: (0 votes)
Are you the publisher? Claim or contact us about this channel.
0
Showing article 74 of 562 in channel 31949556
Channel Details:
Viewing all articles
Browse latest Browse all 562
0
0

In 1910 football in Brazil was still an elitist sport. The top clubs in São Paulo such as Club Athletico Paulistano, São Paulo Athletic Club  and Associação Atlética das Palmeiras were inaccessible to the proletariat.
On August 31st 1910 the Corinthian FC played Palmeiras as part of their tour of South America, winning 2-0 with goals from / Among the spectators were a group of working men, employees of the Railway Company. They lived in the Bom Retiro neighbourhood, an area of many Italian immigrants, and their names reveal these origins: Joaquim Ambrósio,Antonio Pereira , Rafael Perrone, Anselmo Correia and Carlos Silva.
The following day they put the plan into action and founded Sport Club Corinthians Paulista.
Corinthians played their first match on September 10th, 1910, an away game against União da Lapa resulting in a 1–0 defeat. The team was made up of the 5 founding memebers and 6 players from another Bom Retiro team, Botafogo Athletic Association. An original club member Caetano de Domenico remembered: We met at 4 am in Bom Retiro and walked to Lapa. I helped carry the bag of shirts, nothing but  rags... At the end of the match everyone changed in a shed and came away without bathing...
On the14th September Corinthians played a home match against  Estrela Polar, winning 2–0 (goals from  Luiz Fabbi and Jorge Campbell).  27th September saw a 5-0 win over an English club,  Associação Atlética da Lapa.
From these rather humble beginnings Corinthians developed rapidly in terms of both ability and popularity.
In 1913 they joined the LPF, their first league game a 3-1 defeat away to Germania. They finished the season 4th out of 5 with one win.
Remarkably, the following season Corinthians claimed their first Campeonato Paulista, winning the LPF with a 100% record: 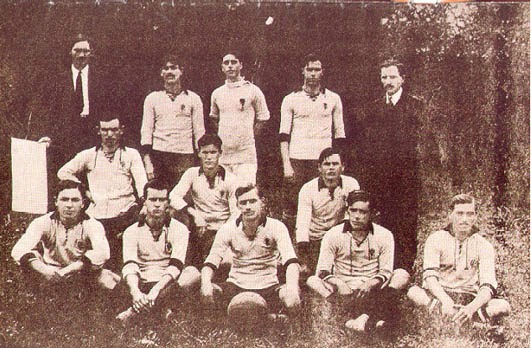 * Germania and Hydecroft left the league and the results of their matches were annulled.
Viewing all articles
Browse latest Browse all 562
More Pages to Explore .....

Tim Ho Wan offering up to 35% off selected items all-day with this takeaway...