cancel confirm NSFW Votes: (0 votes)
Are you the publisher? Claim or contact us about this channel.
0
Showing article 75 of 562 in channel 31949556
Channel Details:
Viewing all articles
Browse latest Browse all 562
0
0 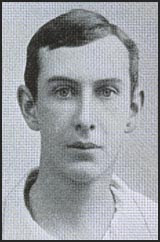 G.O Smith transformed the role of the centre-forward from that of an individual striker into a unifier of the forward line, indeed the whole team.
The Dictionary of National Biography
He was a maker rather than a scorer of goals.
The Times


G.O Smith was widely held to be the greatest centre forward of his age and the greatest player of the 19th century.
Smith was an amateur who played for Oxford University , Old Carthusians and Corinthians.
He made a total of 20 appearances for England (scoring 11 goals), between 1893 and 1901.

* denotes that Smith was captain. His record as captain was:

The British Home Championships in seasons when Smith was captain: