cancel confirm NSFW Votes: (0 votes)
Are you the publisher? Claim or contact us about this channel.
0
Showing article 171 of 562 in channel 31949556
Channel Details:
Viewing all articles
Browse latest Browse all 562
0
0
The earliest games in our list of influential matches predate the establishment of the Association.
Before 1863 there was no Association football, and throughout the 1860s the game was fluid in nature as experimental rules came and went, Spectators (and there were few) witnessed a change from an 'everyone behind the ball' game in which catches and handling played a significant role, as did touchdowns for a while, into something more akin to modern soccer, Having said that by 1870 Association football was still far from being the finished article. There were still no corner kicks or crossbars, ends were changed after every score, and the goalkeeper was not a recognised position 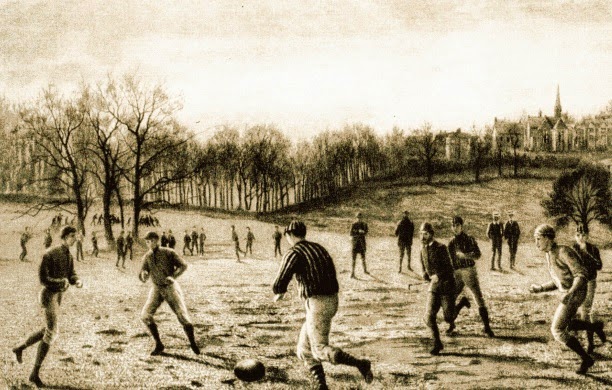 Football at Harrow - played with a pudding shaped ball...
Harrow- 1850s
The Football Association's  Laws of the Game were developed in order to unify existing codes that were in use in various schools and colleges. The Harrow rules were one such code. Given the later importance of Charles Alcock in the development and promotion of the Association game, we must acknowledge the importance of Alcock's earliest footballing experiences.  Alcock attended Harrow from 1855 to 1859 ; he was in Drury's House. The Houses played each other for the honour of being 'Cock House'. It was the format of these knockout competitions that inspired the FA Cup.
The press (in particular Bell’s Life in London and Sporting Chronicle) carried reports on football matches played at all the leading public schools. I have only been able to find one contemporary press report of Alcock playing football at Harrow- Bell’s Life in London and Sporting Chronicle (12.12.58) has an account of a match between Rev. B.H Drury's and Rev. Dr. Vaughan's (the Houses took the names of the leading masters). Drury's won by 1 base to 0 (base was the Harrovian term for a goal)- the base was obtained by 'a capital kick by Mr Alcock'. The result confirmed Drury's as Cock House for the season.

Sheffield FC v 58th (Rutlandshire) Regiment of Foot- 1858
It is impossible to overlook the importance of Sheffield's contribution to the development of the Association game. The Sheffield Rules predated the Football Association by 6 years, and were adopted by many clubs and associations in the midlands. Sheffield was a frequent source of inspiration as the Laws of the Game evolved during the 1860s and 70s. During the early years of its exsitence the Sheffield club played scratch matches between its members.
Sheffiled versus Hallam in 1860 is often referred to as the earliest club football match, however, there are references to Sheffield FC playing a team from the 58th (Rutlandshire) Regiment of Foot in 1858. Unfortunately I have not been able to find any accounts of this match.

Barnes v Richmond 1863
The Presidents side v The Secretary's side, played at Battersea Park on 9th January 1864 was scheduled to be the first encounter under the newly drafted Football Association Laws of the Game.  However, EC Morley et al were keen to get on with it, and on December 19th 1863 the very first game of football played under Football Association rules took place at Limes Field, Mortlake, between Barnes FC and Richmond FC.
The 15 a side game, ' distinguished by no disputes about the rules', ended in a 0-0 draw.


The Association game continued to be played on an informal basis throughout the decade, mainly by clubs in the metropolitan area. Sheffield football also flourished, and both sets of rules underwent gradual changes and slowly a spectacle bearing a closer resemblance to modern football emerged, as handling, fair catches and touchdowns were eradicated.


London v Sheffield 1866
The first representative match under the auspices of the FA.  Sheffield FC had initially asked the FA for a match with one of the FA member clubs. The FA however selected a Football Association XI, drawn from 4 metropolitan clubs- Wanderers, Barnes, NN's and Civil Service. 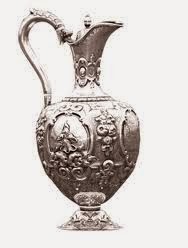 The Youdan Cup 1867
February 16th 1867 saw first round of the first ever knockout football tournament. It was played under Sheffield Rules during a period where the 4 yard goal and the rouge were in use (thus distancing it somewhat from modern soccer). The eventual winners, Hallam, defeated Heeley 2-0 (and 2 rouges to 1) in their first round match.

Middlesex v Kent-1867
Another venture masterminded by CW Alcock to stimulate interest in the Association game was an attempt to introduce inter county matches.
The first of this sporadic series was due to take place on November 2nd at Beaufort House, but Lord Ranelagh, being in dispute with the Amatuer Athletic Club, in whose name the ground was leased, withdrew his permission for his land to be used, and the game was played 'in the wilds' of Battersea Park. The match ended in a 0-0 draw.
The ground was described as being 'in wretched order' but the match itself ('a most stubbornly contested game') was given a good write up.
In these days in which the FA were working hard to spread the appeal of the game it is worth remembering when reading enthusiastic and glowing reports of 0-0 draws played in unfavourable conditions that the author might well have been none other than C.W Alcock!


Queen's Park v Thistle- 1868
I'm not going to turn these posts into a catalogue of the first games of all significant clubs, but i'll make an exception in the case of Queen's Park. Queen's Park assumed the status of an institution within the Scottish game in its earliest days, and fulfilled the functions of a national association. As with Sheffield (above) the earliest games were between scratch sides drawn from club members.
On 1st August 1868 Queen's Park had their first fixture against outside opposition: Played at the Recreation Ground (South Side Park?) fellow Glaswegians,Thistle FC were beaten by  'two goals within an hour'.
Having kept a clean sheet in their debut match Queen's Park didn't concede a goal until March 1875 and their unbeaten run went on until 1876.

Wanderers v West Kent 1869
In the 1860s London's football was played in public parks such as Clapham Common and Battersea Park. There were no enclosed football grounds.
On Saturday October 9th 1869 The Wanderers v West Kent was played at the Kennington Oval, the home of Surrey Cricket Club. This arose from CW Alcock's involvement with Surrey Cricket Club.
As well as generating (negligible) income for the cricket club in the winter months, it meant that the Football Association now had access to a large enclosed venue capable of accommodating thousands of paying spectators. During the course of the following decade The Oval became a regular venue for club fixtures and hosted big events such as FA Cup Finals and semi finals, internationals, and The Varsity match.