cancel confirm NSFW Votes: (0 votes)
Are you the publisher? Claim or contact us about this channel.
0
Showing article 278 of 562 in channel 31949556
Channel Details:
Viewing all articles
Browse latest Browse all 562
0
0 The above sculpture celebrates Betis Balompié's La Liga win in 1935. Among the names on the sculpture is that of Betis' manager- former Manchester United captain Patrick O'Connell.  The team (currently Real Betis) had been promoted as winners of the 1931–32 Segunda División. 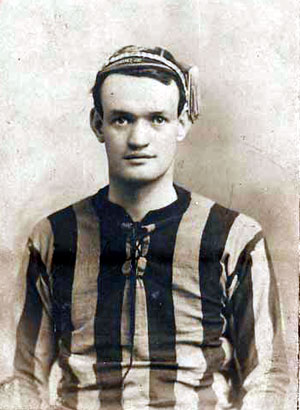 Patrick O'Connell wasn't among the 7 players suspended as a result of the Football Association's investigation into the 1915 betting scandal. There must have been some doubts, however, over his penalty miss in the Good Friday match against Liverpool that gave rise to the charges.

Liverpool Daily Post - 03.04.15
O'Connell was raised in Dublin but began his professional football career with Belfast Celtic.
After spells with The Wednesday (where he struggled to hold a first team place) and Hull City, O'Connell joined Manchester United in 1914, by which time he had represented Ireland 6 times.
O'Connell was captain of Manchester United at the time of the match fixing affair.
In 1919 he moved to Dumbarton.
O'Connell returned to England in 1920, joining Ashington of the North Eastern League. The following season Ashington joined the Third Division (north) and O'Connell was player manager.

O'Connell moved to Spain in 1922 and was manager of Racing Santander for 7 years. he then moved to Real Oviedo before joining Betis in 1932. Following the La Liga success O'Connell moved on to Barcelona. He continued coaching in Spain until 1949.