cancel confirm NSFW Votes: (0 votes)
Are you the publisher? Claim or contact us about this channel.
0
Showing article 279 of 562 in channel 31949556
Channel Details:
Viewing all articles
Browse latest Browse all 562
0
0 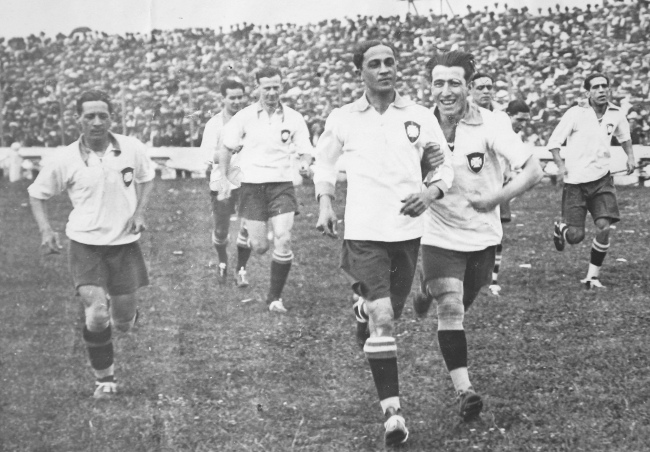 Friedenreich with the Brazil team 1925
Arthur Friedenreich had a phenomenal goal scoring record. It is possible that he was the most prolific scorer in the history of the game.
Let's look at the statistics (or the reputed statistics) associated with Fried:
It has been traditionally asserted that he scored 1239 goals in 1329 games. This figure was supposedly the outcome of a contemporary record which was the work of 2 people; Friedenreich's father and his Paulistano team mate Mário de Andrade e Silva.  If we accept that Fried's career lasted from 1909 (when he was 17) until 1935 1329  games would equate to a shade over 49 games a season.  The scoring rate is 0.93 goals per game.
When Andrade died the records that he and Friedenreich Senior had kept were lost.
A journalist named De Vanney firstly accepted these figures as being accurate and then inexplicably reversed them to promote the claim that Fried had scored 1329 goals in 1239 games. This would have represented a strike rate of 1.07 goals per game.
Other figures (based on analysis of contemporary reports) have been 554 goals in 561 games (Alexandre da Costa) and 558 goals in 562 games (Severino Filho).
A detailed season by season record that appears on RSSSF Brazil gives figures of 557 goals in 562 games (acknowledging the absence of reliable records for a number of matches). This gives a strike rate of 0.99 goals per game.

Looking at this apparently comprehensive record of the matches that Friedenreich played in during his adult life it is hard to imagine where the 767 unrecorded matches (and 682 goals) could have come? There have been suggestions that Andrade might have included scratch matches and Torneio Início Paulista (in which teams would play a number of matches of 20 minutes in one day). Even if this was the case the defecit of 30 matches a season (spread over his entire career) seems excessive.
I am inclined to believe the RSSSF Brazil figures which whilst not accounting for the 1000+ goals that others claim for Fried, are very impressive indeed: