cancel confirm NSFW Votes: (0 votes)
Are you the publisher? Claim or contact us about this channel.
0
Showing article 58 of 562 in channel 31949556
Channel Details:
Viewing all articles
Browse latest Browse all 562
0
0 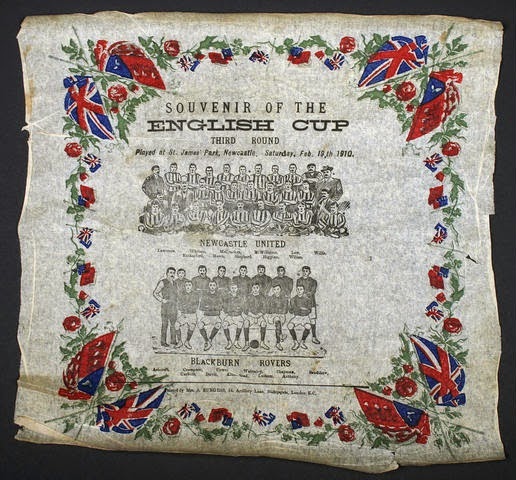 A curious memento. And for tissue paper to survive 100 years...
Described as follows in an auction catalogue:
1910 F.A. Cup third round commemorative tissue Imprinted 'Souvenir of the English Cup third round Played at St James Park Newcastle Saturday Feb. 19th 1910', with team pictures and annotation of players names underneath. Floral flag design to outer edges. Printed by Mrs S.Burgess of Bishopsgate, London.

If we look at the teams that played that day we will see that there was plenty of quality on show.  Blackburn Rovers were 3rd in Division 1 and Newcastle United 6th.


The 54,000 crowd brought in receipts in excess of £2000 (described in the contemporary press as 'an enormous sum').
Higgins opened the scoring in the first minute ( a quick short drive). Rutherford added a second in the 25th minute but Rovers immediately pulled one back through Anthony. Howie completed the scoring in the second half.